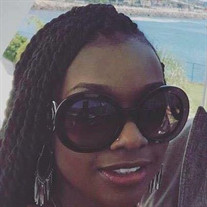 A Portrait of Life The life of Brande LeJean West began July 18th, 1987 in Inglewood, CA. She was a bubbly, happy little girl who always had a smile on her face. Brande spent her childhood and adolescence in Rialto, Ca, where she would make lifelong friends at Bemis Elementary School, Frisbee Middle School, and Eisenhower High School. It was at Frisbee where she met Danny Stewart. She accepted Christ and was baptized at the “Loveland Church” of Fontana; Pastor Chuck Singleton. Just a year before graduating High School, her family moved to Riverside, California. There, she received her diploma from John W North High School. Following graduation, she set out to Los Angeles to begin pursuing her biggest passion: “fashion”. After working in Los Angeles, she and Danny relocated to Las Vegas, where she realized her dream by entering the world of High Fashion. In Las Vegas Danny & Brande’s relationship flourished. Brande was a glamorous, chic woman. She was ambitious-- a go-getter. This much was evident since she was a child. She was also very personable--she had the ability to converse with and relate to people from all walks of life. She had a unique ability to combine her ambition, enthusiasm, and passions to achieve her goals. Whether she was doing hair for friends and family, attending cosmetology school, or working at Louis Vuitton, her desire for success showed. On March 15th, 2015 she married the person she realized to be, the love of her life; Danny Stewart. Brande Stewart left behind her lovely mother, Jean; her sister, Rolanda; her brother, Chris (Jennifer); her nieces and nephews: Imani, Cameron, Jordynn, Cade, Kyle Jenae, Keishanna, and Pebbles; her beautiful godson, Jaden Palalay, and her and Danny’s loving Pitbull, Kody. Preceded in death was Leroy West. On behalf of the West Family, we would like to thank everyone for everything you have done, as we celebrate the life of our beloved Brande. Although her life was short, she touched so many with her vibrancy, humor, and beauty. Because of that, we celebrate the times that we have had with Brande. We are blessed that she brought her husband Danny, into our lives. We rest, knowing that Brande lived the life she wanted, on her own terms, and we forever honor her in the beyond. ~ BRANDE LEJEAN WEST-STEWART ~

A Portrait of Life The life of Brande LeJean West began July 18th, 1987 in Inglewood, CA. She was a bubbly, happy little girl who always had a smile on her face. Brande spent her childhood and adolescence in Rialto, Ca, where she would make... View Obituary & Service Information

The family of Brande L. Stewart created this Life Tributes page to make it easy to share your memories.

A Portrait of Life
The life of Brande LeJean West began July...

Send flowers to the Stewart family.