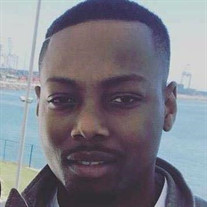 Always A Step Ahead… August 30th, 1988; Dwayne & Janet Stewart welcomed their 3rd child, Danny Edward Stewart in Los Angeles, CA. Little did anyone know, his life theme was unveiled at his birth. “A Step Ahead”! Born premature at a mere, 4 pounds, he ultimately developed into a 6’ 4”, gentle giant. His life, from this point on, would be lived in an anything, but premature fashion. Danny completed his formal education culminating with his graduation at; Eisenhower High School, in Rialto, CA. He enrolled in San Bernardino Valley College. Danny enjoyed & excelled in baseball. From the age of 5 playing T-ball with his young brother, Dwayne Jr., to eventually playing junior baseball. Danny, would continue to excel in sports being… “A Step Ahead”! Ultimately in High School he would be a varsity starter, on both the baseball and football teams. Although sports seemed to come natural for Danny, academia was a bit challenging. He was diagnosed early with ADHD. He was prescribed medications that he would have to take, possibly for a lifetime. Danny again, being… “A Step Ahead”, pushed hard, got good grades and started learning at an extraordinary pace. He caught up to, and exceeded many of his classmates and discarded that label of “ADHD”. Though Physicians diagnosed one thing, God had the last word! In his spiritual life, Danny was once again…” A Step Ahead”! Danny accepted Christ on August 1, 1999 and was baptized at 11 years old, by Pastor I. Brazier. He later, as a teenager, joined the “Loveland Church” of Fontana; Pastor Chuck Singleton. He was a shining example to look up to. He would maintain that light throughout his life, for his family and friends. Always… “A Step Ahead”, his Child-hood “crush”, was a girl named; Brande West. He determined, that she would someday be, “His Girl”. Once again…” A Step Ahead” …, he got the courage to try & escalate their friendship. She agreed. They began dating in school, and quickly became, “The Power Couple” complimenting each other, in ways that only soul-mates could. Danny being “A Step Ahead” …, felt he had a duty to protect Brande, and if they were going to have a productive life, he was getting out of Rialto, which he feared, was becoming gang infested. He was going to protect his queen! He & Brande decided in August 2007, to re-locate to Las Vegas NV., where they thought they would have the opportunity of a better life and she could pursue her dream of getting into “High Fashion”. He rented a truck and moved Brande to Las Vegas with his mother. By the end of the month, he relocated there also. They became room-mates and on March 15, 2015; they became Husband & Wife. Danny’s & Brande’s relationship blossomed from a mere childhood crush, to best friends, and ultimately to life partners. Danny’s professional life took an unexpected, but amazing direction. He knew he had to, and was going to, provide for his family. He quickly got hired by a Las Vegas security firm. That job would only be a stepping stone. Always being,” A Step Ahead” …, he quickly made powerful connections in Las Vegas. Those relationships would prove beneficial for him, as he worked his way up from a security guard, to loss prevention at “Aria/Prada”, a premier hotel on the Las Vegas strip. As prestigious as that position was, even that was not enough for Danny’s lovable character and work ethic. He was hired at John Varvatos, as a personal stylist for “VIP” clients such as, Carlos Santana, rapper MGK and several others. Danny’s life was always lived “A Step Ahead”! He lived & loved with the clarity of who he was. Unfortunately, for his family, friends and coworkers, he would, On October 15th, 2017; transition from this world, just as he entered it, “Premature”! We know God works in mysterious ways, and his plans are always greater than ours. Danny’s spirit however, lives on in the hearts of his family, including his Parents; Dwayne Sr. & Janet Stewart (Avondale, AZ) Brothers; Jimmie (Los Angeles), Dwayne Jr. (Avondale, AZ), Sister; Shimene (Las Vegas) Aunts, Uncles, cousins, extended family members and a host of co-workers and friends.

The family of Danny E. Stewart created this Life Tributes page to make it easy to share your memories.

Send flowers to the Stewart family.