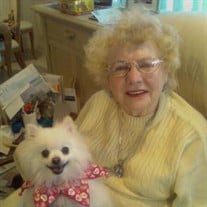 Elizabeth Louise Hollett October 7, 1923 to July 17, 2018 Elizabeth Louise Hollett passed away on July 17 at 4:30 PM in Camarillo, CA. She was 94 years old. Ms. Hollett was born in Syracuse Indiana. She married John R. Kennedy of Plymouth, Indiana and raised a family in both Plymouth, Indiana and Hammond, Indiana. In 1965 she moved to San Jose, California and earned an AA degree from San Jose City College before transferring to San Jose State where she earned a B.A. degree in Psychology in 1969. In 1968 she was a Dormitory Head Resident at San Jose State. She later earned a Master's Degree in Social Work from the University of Oklahoma at Norman in 1976. She then moved back to California and lived in Riverside for 26 years prior to moving to Camarillo, California to be nearer her children in 2002. She worked for various agencies in the Riverside-San Bernardino area including Child Protective Services for San Bernardino County as well as maintained her own private practice in marriage and family counseling. She was a licensed Clinical Social Worker and a Marriage and Family Therapist and held both Community College Instructor and Standard Teachers Credentials. In 1980 she received a B.S. degree in Health Care Management from LaVerne University. She taught parenting classes as well as Educational/Vocational Planning For Women., and taught English as a Second Language. While living in Riverside, she served as president of the Riverside Business and Professional Women’s Association and later the Riverside Opera Guild. She was a member of the Riverside Rebekah Lodge No. 12 and held several offices in that organization. She was an active member of Calvary Presbyterian Church where she was a Deacon and an Elder. Ms. Hollett was a life-time member of the Rosicrucian Order, AMORC. She traveled to Egypt, Jordan, Syria, Lebanon, the Sinai Peninsula and Turkey and Greece and India. Later in life she spent several weeks in China while serving as a missionary and teacher of the English language. Ms. Hollett was preceded in death by her husband John R. Kennedy. She is survived by her daughter, Mary (Kennedy) Jacob of Santa Barbara; her son, John Robert Kennedy II and Alison (Feldman) Kennedy of Sherman Oaks; her grandson, Rustum Jacob and Stephanie (Carter) Jacob; her two great grandsons, Elliot John Jacob and Ethan Joe Jacob; and numerous nephews and nieces. The family will hold a graveside service on Friday, August 3, 2018 at 3PM, prior to burial in Evergreen Memorial Park in Riverside, CA

The family of Elizabeth L. Kennedy-Hollett created this Life Tributes page to make it easy to share your memories.

Send flowers to the Kennedy-Hollett family.